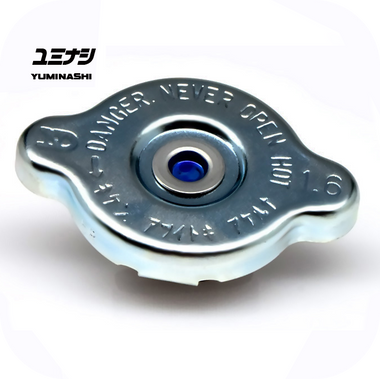 (PRODUCED BY NIPPON DENSO IN JAPAN)!...

● If you have a big bore kit installed on your engine with a higher then stock  compression ratio which usually has a higher combustion chamber temperature, then it's a good idea not to overlook this and to tune the cooling capacity of your engine at the same time you are tuning the performance of your engine.

If you don't balance this out, then it's possible to run in to an overheating engine with a risk on damage and coolant boiling over everywhere which is not only uncomfortable while you are traveling, it would stop your journey right there.

With a situation going on like this you can't continue traveling and you are forced to wait until the engine has been cooled down to remove the pressure cap and to refill your radiator with coolant so you can continue your journey with a high risk that the story will be repeated again once you start driving.

● A simple device like this 1.6 High Pressure Radiator Cap will help you to raise the boiling point seriously from your coolant and avoid your liquid to turn in to steam.

To understand this we need to give a short word of explanation about coolant (antifreeze) and the role of radiator pressure in general...

Propylene glycol, another common coolant, has an even lower specific heat so keep this in mind if you are working on a solution to fix your overheating problem.

Assuming a 100 gallons/minute coolant flow rate (378.5 liters/minute) and an energy loss through the coolant system of a certain horsepower, the water temperature increase would be 10 degrees, the ethylene glycol water mix would gain 20 degrees, and propylene glycol would gain 33.3 degrees.

Compensating for the reduced heat capacity of coolant/water mixes would require circulating more fluid through the system.
Assuming a fixed amount of circulating fluid and radiator capacity, running 100 percent water would be the most efficient coolant in terms of its ability to conduct heat with minimal temperature rise.

In other words, of all common liquids, water requires the most heat energy to change its temperature.

While the cooling capacity from water is higher, water is also corrosive and if you don't use a corrosion inhibitor when running pure water it will gradually eat away at seals and cause metal inside your engine to deteriorate so that's why we generally add antifreeze to distilled water to create the coolant we run in the bikes.

As the coolant gets hot it expands creating pressure in the system.
The hotter things get, the more pressure created.

The radiator cap allows pressure to build up in the cooling system and will eventually vent that pressure to the overflow bottle as the need arises.
The cap does this by a spring loaded valve which serves as a pressure relief valve at a rated pressure.

You’ll notice that there’s a plunger on the bottom of the cap. As pressure builds, it pushes up on that valve until eventually the valve is opened far enough for coolant to flow out of the tube connected at the radiator fill neck. It closes again when the pressure has dropped to the desired level.

This tank is there just to catch the coolant and store it until things cool back down, when a vacuum will be created and most of the coolant will return to the cooling system.

Pressure actually increases the boiling point of a fluid as you may know from high school physics class.
The pressure literally forces the liquid to remain a liquid longer and does not allow it to transform into vapor (steam).

● All modern motorcycle cooling systems are under pressure and completely regulated by the radiator cap with stock 0.9 bar which is 13psi.

This special 1.6 high pressure radiator cap installed allows the pressure to increase from 0.9bar to 1.6bar or with other words from 13psi to 23.2psi.

How much does the pressure raise the boiling point? Well, it’s about 2-3°F for every psi that we increase the pressure of the system.
By using a stock 0.9 bar cap we make the average boiling point of a stock cooling system somewhere closer to around 120-121°C (248.3-250.3°F).

This is also the reason why your engine temperature warning light shows the red light at 120°C or 248.3°F because from that very moment on you start to produce steam which will eliminate your entire cooling system, with as result again a exponentially even hotter running engine, which end up in many cases with a bended cylinderhead and/or a leaking head gasket.

※ This 1.6 bar cap can not be installed on the 2015 CLICK125i LED and 2015 CLICK150i LED and other models who have the round black radiator cap installed.
If you have such a radiator cap on your radiator, then we recommend to replace your stock radiator with a high performance radiator. 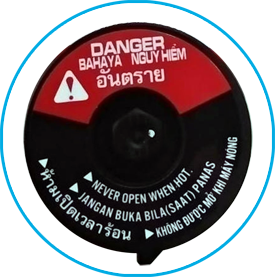 ※ BUYING MORE THEN 1 PIECE CUT THE TRANSPORT PRICE, AND YOU RECEIVE A 10% DISCOUNT ON TOP OF IT!
※ B2B: CLICK THE "BUY IN BULK AND SAVE" LINK!... 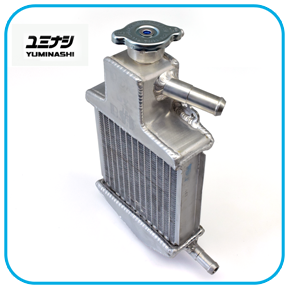